As part of our virtual ARC Industry Forum this year, we continued our executive interviews with leaders in the world of manufacturing, industry, and critical infrastructure. This year’s interviews were focused on different initiatives that accelerate digital transformation in a post-COVID world. Jim Frazer, ARC Vice President of Smart Cities and Infrastructure, spoke with Phil Christensen, Vice President of Digital Cities Reality and Spatial Modeling at Bentley Systems, about how Bentley is helping cities in developing and deploying Digital Twins at City Scale. You can access the entire interview below and/or here at the ARC YouTube Channel.

The digital twin can be applied at any stage of the lifecycle, explained Mr. Christensen. Basically, there are four groups involved in deploying digital twins at city scale:

All these groups benefit from the digital twin that encourages and facilitates better collaboration between city authorities and citizens, the asset owners, and the engineering firms, to evolve the physical fabric of the city. As a project is envisioned a digital twin can be used to communicate in a 3D model about its impact on multiple stakeholders. 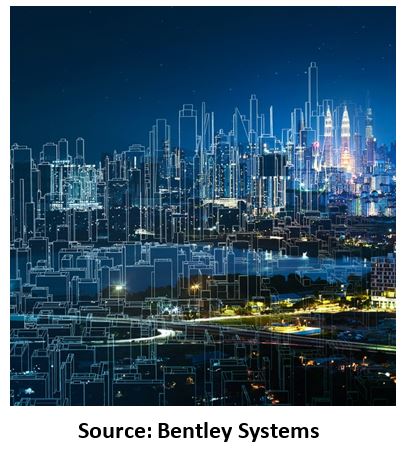 Open Cities Planner capability makes the digital twin available through a large touch screen that might be in a city hall, done interactively, or through the web browser. So, you can just look at it on your home computer or even on a mobile device and see a proposed development and comment about it from any location.

The future of digital twin technologies lies in capturing the current/real-time state of the constantly changing city with new technologies, such as drones, satellites, aerial photography, sensors on vehicles, or crowdsourcing the capture of data from mobile phones around the city. These are all ways to build the reality model – the digital context of the city. Mr. Christensen stated that for Bentley Systems, “this is really an exciting area where we can get a much more accurate and high-fidelity 3D model of the city that evolves over time.”

Another interesting area is the development of IoT and the sensors embedded in the different networks (buildings, street lights, etc.) across the city to continually monitor the performance of the city’s various functions to better understand necessary actions to be taken. For example, flood sensors to detect rising water levels. The deployment of sensors will increase the streams of valuable digital data and strengthen the digital twin.