Digital and Invisible Threads of Oil and Gas

The digital transformation of the oil and gas sector is a tangible reality.  We talk and read about digital twins, autonomous robotic drilling, pipeline scheduling, leak detection, drones etc. and how these technologies have improved efficiency and productivity levels.  Today, oil and gas companies have greater agility to expand or change their business models and deploy innovative strategies to meet fluctuating market expectations.  All this is common and verifiable knowledge, and digitalization is just the tip of the iceberg.

The Digital and Invisible Threads of Oil and Gas

At ARC, we have written reams about the digital thread that connects manufacturing processes and systems - the framework which connects data flows and produces a holistic view of an asset's data across its product lifecycle.   But what interests me more is the invisible thread that runs through and controls the oil and gas industry - this is the thread that connects politics, a country’s economy, the currency exchange rate, policies, and market dynamics.

The global oil price, whether high or low, reflects the state of the global economy.  Both at the macro and microeconomic levels the price of oil impacts industrial and economic growth.  Higher oil prices impact the consumer directly and indirectly, because the costs of manufacturing, transporting etc. increase, and these in turn affect the prices of a variety of goods and services.  The old truism rings true, “As flows the oil, so flows prosperity.”

The Invisible Thread: Oil and Politics

Politics is at the core of global oil markets.  The political success or failure of any government is affected by oil.  This was exemplified by a number of politically related events towards the end of 2018, such as internal OPEC (Organization of the Petroleum Exporting Countries) politics, US-Saudi Arabia relations, and US-OPEC relations.  These dynamics affected oil market outcomes and its trajectory.  The return of sanctions on Iran and subsequent waivers for oil markets in 2018 caused market uncertainty and price volatility. 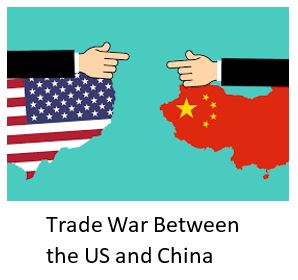 The unending trade war between the US and China is putting energy dominance at risk.  The oil industry is a crucial driver of the US economy and has made the country the world’s top producer.  The US relies on imported equipment, wellheads, and other manufactured parts from China to remain globally competitive.  Inevitably, a trade war increases costs and energy prices for consumers.  China’s recent decision to increase tariffs from 10 to 25 percent on LNG from the US, aggravates the pain.  Oil prices fell in volatile trade, weighed down by equity markets as China escalated the trade war with the US.   However, supply constraints linked to the OPEC output cuts and political tensions in the Middle East offered some support.  Brent crude futures, the international benchmark for oil prices, were at $69.46 a barrel, down 66 cents (0.9 percent), having hit a session low of $68.08.  U.S. West Texas Intermediate (WTI) crude futures fell 0.6 percent to settle at $58.81 per barrel, after hitting a low of $56.88, their lowest level since March 12th this year.

Oil and Politics in India

As the world’s third largest importer of oil, India is among the most vulnerable to rising energy costs.  India’s dependence on crude oil imports has been increasing; 83.7 percent of India’s crude oil is imported, up from 82.9 percent in 2017-18.  Earlier this month, the exemption expired for India to continue to import oil from Iran before US sanctions kick in.  The US, an increasing source for Indian oil imports, has said that it cannot sell oil to India at discounted rates (like those offered by Iran).  India is now looking for alternative sources for crude oil from countries, such as Guyana (where ExxonMobil recently announced the discovery of a major oilfield) and Kuwait.  China and India are discussing joint strategies to offset energy costs and improve energy security.

Post elections, fuel prices in India are on the rise.  According to economists, higher global oil prices could lead to a weaker rupee, higher inflation, the ruling out of interest rate cuts; and could further weigh on twin current account and budget deficits.

Many books have been written on the link between oil and politics.  A recent book that caught my attention is titled the Politics of Oil - Controlling Resources, Governing Markets and Creating Political Conflicts, by Dag Harald Claes.  This book combines legal studies, economics, and political science to illustrate how governments gain and exercise control over oil resources, and how politics influences the global oil market.  The author discusses the exercise of political control over oil resources, their extraction, and the income from oil exports; the caprices of oil market forces and political attempts to govern them; and finally, the complex role of oil in international and domestic conflicts.