Drivers and Challenges of Artificial Intelligence in Manufacturing

At the recent ARC India Forum, “Driving Digital Transformation in Industry and Cities,” Mitsubishi Electric participated as a Global Sponsor.  This provided the company with an ideal opportunity to showcase its offerings and expertise in artificial intelligence in manufacturing.

Key themes communicated include improved perception based on machine learning techniques, learning control policies through model-based reinforcement learning, as well as cognition and reasoning based on learned semantic representations.  Applications range from automotive and robotics to building and home systems.  The presentation by Chris Hazlewood, Senior Manager, Promotion Section, Overseas Planning & Administration, Factory Automation Systems Division, Mitsubishi Electric focused on the drivers and challenges of AI in manufacturing; with emphasis on the human element. 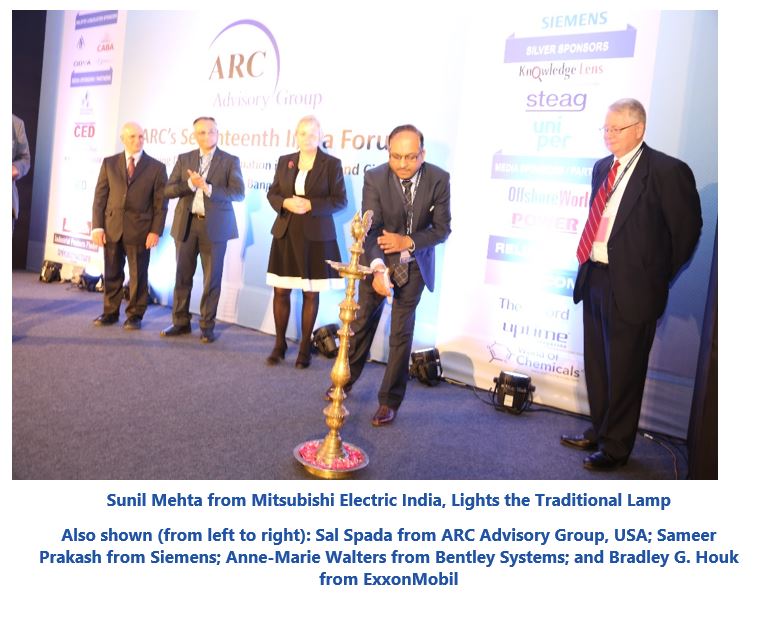 Mr. Hazlewood began his presentation by providing statistics showing survey results of where AI is used and which applications use AI.  Interestingly, the understanding and awareness levels of the general public and experts were almost on par.  However, Mr. Hazlewood pointed out that adding AI is not like adding “salt and pepper,”  it cannot be “sprinkled-on” and then magically transform processes,” he said. “There will be challenges.”  A very recognizable icon of the Industry 4.0 environment is a robot, but robots can have their own challenges such as issues with the gripper to pick up things (how much pressure to apply, movement paths, what to avoid, etc.).  By itself, the robot has no senses; whereas, humans have five senses, which can help guide them to pick up something.  The robot needs certain attributes and the ability to process data to understand what is required of it in a particular environment.  A robot requires a lot of inputs and specialized AI applications for each area, he  explained.

Very simply, AI  is a mathematical way to analyze information that is best suited for a particular job.  It tries to mimic what humans have been doing for over 2,000 years – applying common sense, logic, and learned responses to a situation and making snap decisions.  The robot is expected to do the same, but often needs additional capabilities to do so, said Mr. Hazlewood.  In this context, he spoke about Microsoft’s Tay, an AI-enabled chatbot released in 2016 that the company recalled within hours as it started to post offensive and politically incorrect tweets.  This occurred because some web users taught it those inappropriate things and the chatbot couldn’t differentiate good from bad/right from wrong and thus learned it all.  Later, he spoke about the issues reported in the media connected with the Boeing 737 Max 8 aircraft.  Apparently, conflicting information or lack of information coming from a single sensor creates false scenarios; resulting in wrong actions.  In another reported example, IBM’s Watson AI has been retracted from the pharmaceutical sector for drug discovery as it is currently not performing well in test-case scenarios to diagnose and recommend appropriate treatments for cancer patients, said Mr. Hazlewood.

Presently, AI applications and activities are still at the embryonic stage; there are bound to be such glitches, so we must be careful, he explained.  But in the foreseeable future,  AI technologies and autonomous applications will gather speed and revolutionize manufacturing processes and our lives.  Mistakes will happen because we are human; and as we learn from our mistakes we can improve the AI  applications.  The more complex the situation the AI is applied to, the longer it will take to gain stable, reliable operations, said Mr. Hazlewood.

AI in the Manufacturing Context

Continuing with the robot analogy, Mr. Hazlewood showed a video of two fried eggs: one was a real egg; the other an artist’s sketch of a simulated model.  Since it was difficult for us humans to tell them apart, he suggested that it would be even harder for the robot to do so.  For example, without 3D vision the robot would not be able to perceive depth.  AI cannot solve all our problems, but can certainly enhance performance.  Manufacturing-based AI will exist at all levels because it can reduce reaction times; reduce server/network costs; and enhance safety and security.

A UN report states that there are more elderly people (705 million over 65 years of age) in the world than children (680 million under age four).  As life expectancy increases, there will be more older people in the workforce, which is not an ideal scenario.  Countries such as Japan, with an aging population, are now recruiting more foreign nationals into the manufacturing sector; but these economic migrants will return home after meeting their monetary goals, explained Mr. Hazelwood.  To remain sustainable, the manufacturing sector must utilize AI in harmony with the workforce. In manufacturing, time is money and every millisecond counts.  Since organizations will need to achieve optimal performance quickly, AI-augmented training and guidance systems (e.g. poka yoke) will become important.  Overall, the balance is in favor of AI because of the aging population, traceability needs, production costs, etc.  AI will be platform-based with a multitude of skills and will exist at all levels, he said.

A survey conducted on federal jobs in the US at risk from AI by 2030 reveals that tax examiners face the maximum risk.  Scrutinizing all jobs globally, the survey shows that workers in developed economies face a lower risk of losing jobs to AI.  This could be attributed to the fact that developed countries have already modernized and automated their plants; but in developing countries, AI has just started to make inroads and is going to make a huge difference.  It’s a cultural change that industry and society has to prepare for, said Mr. Hazlewood.