How Biden Will Impact the Future of Energy

President-elect Joe Biden has pledged to rejoin the Paris accord and reverse numerous Trump executive orders.  But what will be the actual impact on clean energy and environmental justice?

President-elect Biden could possibly reverse most of President Trump’s environmental policies. Those policies erased or loosened nearly 100 US rules and regulations on pollution in the air, water, and atmosphere. Trump has been a strong supporter of fossil fuels, but in spite of his characterization of coal as “beautiful clean coal,” its use for generating electric power has been in sharp decline over the past four years. A combination of circumstances drove the price of oil negative on April 20, 2020, as demand for energy collapsed amid the coronavirus pandemic while major supplier nations like Saudi Arabia and Russia continued to flood the market with oil. Oil prices have not recovered much above $40 per barrel, resulting in downsizing, layoffs, and consolidations in the oil & gas industry in the US and elsewhere.

With low-cost natural gas readily available, no new coal plants are being built in the US. Utility-scale solar power with lithium battery storage has also become cost-competitive with natural gas power plants. During the campaign, Biden was careful to avoid articulating a policy that would downsize the hydrofracking industry but, under the current circumstances, that industry has already been downsized. Biden has pledged support for renewable power generation and the expansion of electric vehicles and charging stations. The oil & gas industry will gradually shrink as existing infrastructure in transportation, buildings, and industry converts to electric power. The future of the coal industry in the US is bleak, as coal-fired power plants can no longer compete. Nuclear power plants are also under stress as the low price of power, combined with the fixed costs of operation and expensive mandated upgrades have driven plant closures.

With support from the Democratic party, Biden has made a commitment to eliminate carbon pollution from power plants by 2035 through technology-neutral standards for clean energy and energy efficiency. The plan will dramatically expand solar and wind energy deployment through both community-based and utility-scale systems. These include plans to install 500 million solar panels within five years, including eight million solar rooftop and community solar energy systems and 60,000 made-in-America wind turbines.  This appears to be an energy policy that looks to the future for new opportunities for industrial growth and prosperity, rather than past energy policy that fails to recognize both the finite nature of the earth’s fossil energy resources and its impact on the environment.  ARC observes that it’s not entirely by coincidence that many energy majors have shifted significant capital investments to renewables while continuing to pursue new E&P opportunities.  We also observe that other nations, China, in particular, appear to be going “all in” on renewables, while continuing to explore other energy options. 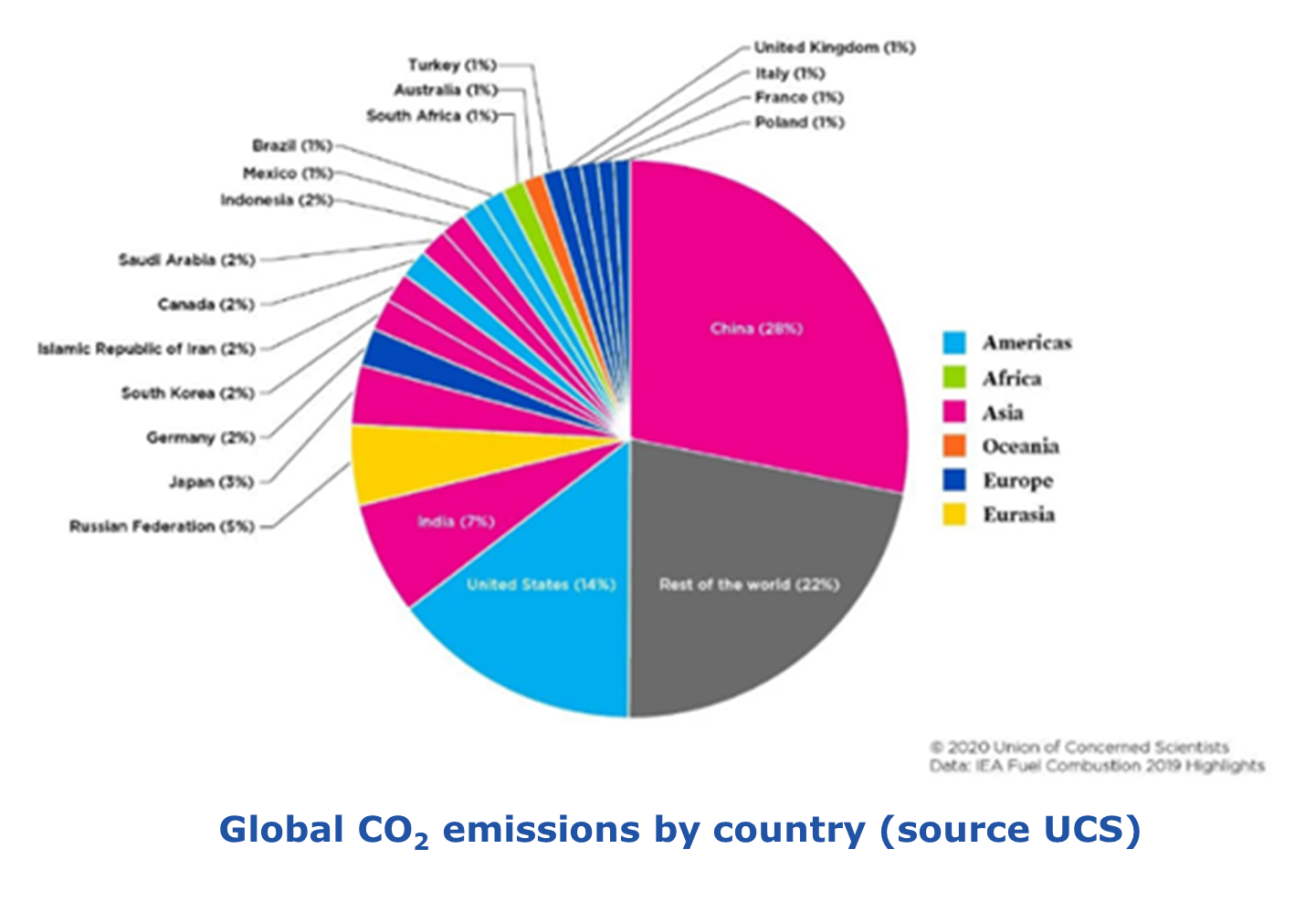 While China produces 28% of the world’s CO2 emissions, the US is in second place at 14%. China, however, produces about 25% of its energy from renewable power while the US produces 18% from renewables.  Biden promises to rely on science to guide environmental and COVID-19 policy. While technical issues may be dealt with scientifically, the hard problem is a combination of economics and political resistance. The elephant in the room for the environment is CO2 emissions, which continue to rise as developing countries expand electric power, buy new automobiles, and expand the use of energy-consuming appliances like HVAC systems. 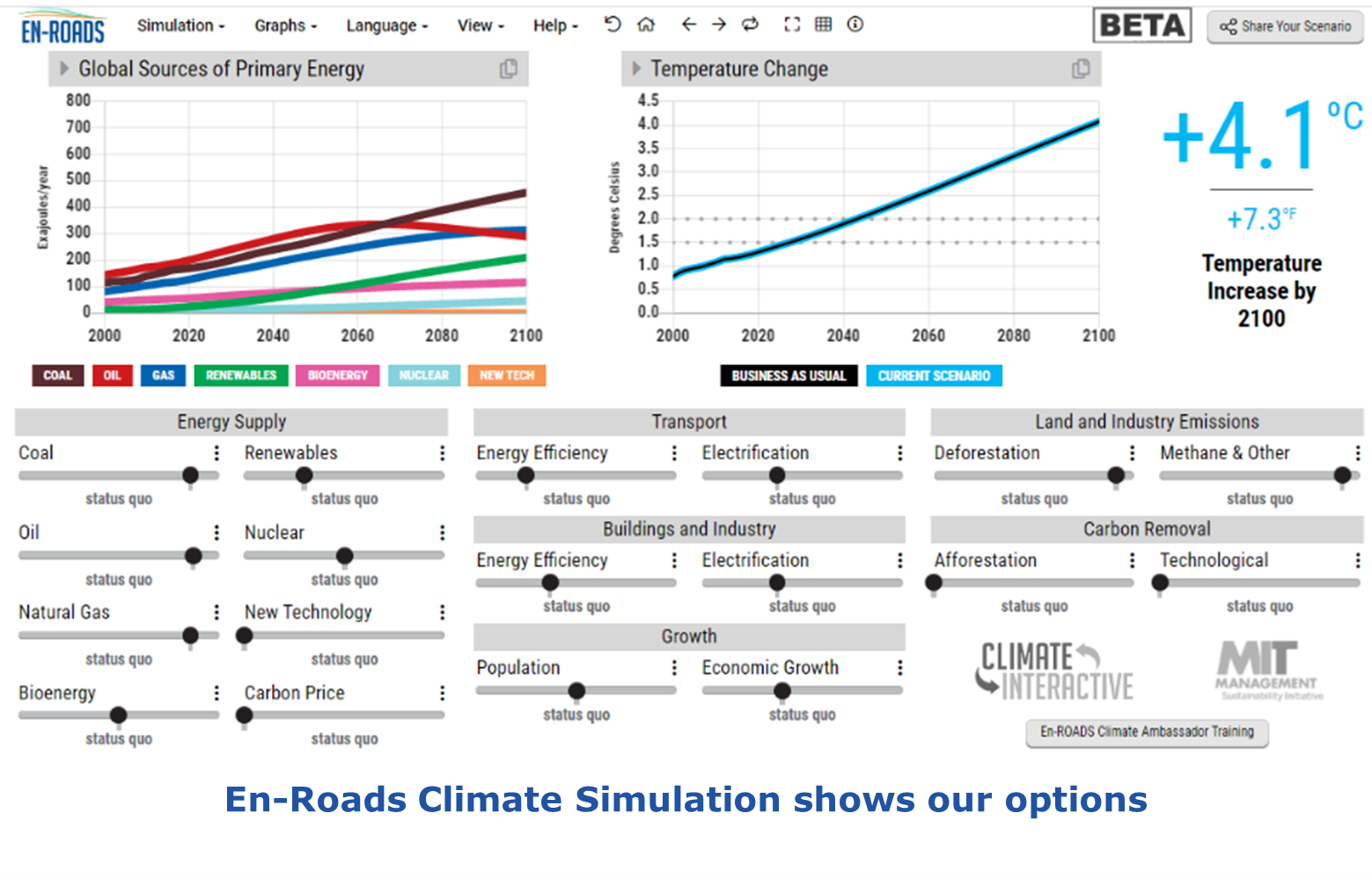 The MIT En-Roads simulator developed by climate interactive shows the options available. This simulator quickly makes it obvious that we should have started sooner and that putting a price on carbon is an essential part of the solution. Putting a price on carbon has been akin to political suicide in the past, so there is some question about how Biden will be able to work with a likely Republican-controlled US Senate and the many special interests that will resist this solution.

ExxonMobil, BP, Shell, Total, and other energy companies in the Climate Leadership Council CLC have expressed support for a carbon fee of $40/ton as the first pillar of their plan, but this has largely failed to materialize. The Citizens Climate Lobby (CCL) is another well- known organization that advocates for a bipartisan carbon fee dividend program. The advisory board has many notable members.  These include Steven Chu, former Secretary of Energy; climate scientist, Dr. James Hansen; and Dr. George Shultz, Former Secretary of Labor, Treasury, State, and Director of the Office of Management and Budget.

Certainly, people around the globe will consume more energy as they strive for a higher standard of living. In 2019, electric power production in China alone surpassed the US and EU27 countries combined. People around the world will be buying more cars, houses, and appliances, and these growing economies will consume more energy. In this environment, it will be very challenging indeed to reduce CO2 emissions as fossil fuels will likely remain in the energy mix for decades to come.  Even with the US rejoining the Paris Accord, more will need to be done to avoid the harmful impacts of rising temperatures. The basic plan is to transition to clean electric power first and then transition transportation, buildings, commercial and industrial facilities to electric power.

Governments have consistently provided various tax benefits and subsidies for every energy industry including nuclear, oil & gas, coal, wind, biofuels, and solar. One of the big problems is that these have been inconsistent from administration to administration. Subsidies have helped solar and wind technology develop into what is now the lowest-cost way to make electric power.

According to Biden, we will set a bold, national goal of achieving net-zero greenhouse gas emissions for all new buildings by 2030, on the pathway to creating a 100 percent clean building sector. Within five years, we will incentivize tens of billions of dollars in private-sector investment to retrofit four million buildings, including helping local governments save money and cut pollution by weatherizing and upgrading energy systems in hospitals, schools, public housing, and municipal buildings.

Biden has the chance to change the leadership and guide the following federal agencies, and by working with various other countries the State Department staff will also play a key role internationally:

Many other parts of the federal government also have an impact.  These include the Department of Defense, Department of Transportation, the FAA, NASA, and NOAA.

Carbon capture cannot work for cars. It is a costly addition to gas power plants that would raise capital costs and reduce operating efficiency. Solar and wind now are the lowest cost source of electric power, but they need grid energy storage to compete with gas power plants.

Lithium storage batteries have proven themselves on the grid for short-term services like frequency control but cannot store power cost-effectively long term. Of all the batteries being produced today, roughly 90% are going into vehicles. With increasing renewables on the grid, economics will compel utilities to create new markets for the grid-interactive home and EVs will begin to support vehicle-to-grid (V2G) capability as homeowners participate in new markets and EV battery life improves to support more charge cycles.

Hydrogen may yet play a role in energy storage, but the technology’s typical 36% round trip efficiency shows it has a long way to go to compete with batteries at 95% efficiency. As the industry expands the cost and efficiency of electrolyzers, compression, storage, and fuel cells will improve. Hydrogen has the potential to store energy for longer durations.
There does not appear to be an economical way to just take carbon dioxide out of the air. Reducing deforestation and encouraging reforestation will help some, but industrial processes must move a lot of air to capture CO2 which is in the 420ppm range. Capturing CO2 in tailpipes or smokestacks at 13% is much easier but still expensive.

Subsidized biofuels like ethanol made from grains that compete with food have proven to be a bad idea from the perspectives of overall CO2 emissions and land use. Bio-diesel may be marginally better than standard diesel but overall, it is still producing significant CO2.

Geo-engineering can compensate for CO2 in principle, but “installing sunglasses” on the planet is a high-risk proposition with unforeseen consequences.

According to the IEA report on Renewables for 2020 with analysis and forecast to 2025: In sharp contrast to all other fuels, renewables used for generating electricity will grow by almost 7% in 2020. Global energy demand is set to decline by 5% in 2020, which is largely due to the impact of the COVID pandemic.

While not all Republican administrations have been as insensitive to environmental concerns as the current one, historically in the US, Democratic and Republican administrations have swung back and forth on the environment like a pendulum. But a swinging pendulum cannot undo past damage. The CO2 we put into the atmosphere lasts for more than 100 years and the integrating nature of the extra energy being absorbed has led to a noticeable increase in ocean, land, and air temperatures. Reversing this warming trend would require reducing CO2 emissions, yet the world continues to add to the CO2 in our atmosphere every year. Overall, Biden should improve our environmental performance, potentially enabling the US to regain its reputation as an environmental leader.  Scientists have been quite consistent that our situation requires the whole world to take some highly disruptive actions with a significant transition towards a sustainable global economy.

While the fossil industries are in decline, there are many other growth areas. The electric grid is evolving fast with new communications, controls, new grid service markets, and many private solar and wind farms and battery-based microgrids. New renewable energy manufacturing, installation, and support will create new jobs.  EVs will be the preferred vehicle within a decade. Improving building efficiency, lighting, and heating with new mini-split heat pumps is a growing industry. The concept of a SMART grid and a SMART grid-interactive home will create new opportunities as the world attempts to transition to a sustainable economic model. For more information look up the SMART Cities practices at www.arcweb.com and consider joining or supporting the SMART Cities Digital Transformation Council.  https://www.arcweb.com/digital-transformation-council-smart-cities