The future of industrial networking just got a lot brighter. After a year of uncertainty surrounding the future direction of industrial Ethernet, recent announcements appear to have settled a looming rift in the industrial networking community. In a significant move, the OPC Foundation announced in late 2018 that it will now actively promote its Publish-Subscribe model for communication with devices at the field level. In addition, time-sensitive networking (TSN), a mechanism for time synchronization and determinism, is quickly gaining acceptance among industry players. The combination of these two technologies is paving the way for the emergence of a single, universal solution for Ethernet in industrial applications that may one day replace today’s industrial Ethernet solutions.

Maybe This Time: The Vision of a Universal Industrial Network

In terms of networking, the industrial world has missed the boat twice: in the late 1980s, when the rest of the world settled on Ethernet as the sole networking standard, and again in 2004 when Ethernet re-emerged as the solution of the future, but industry failed to agree on only one standardized “industrial” Ethernet. The result today is that while we have industrial Ethernet that meets industry requirements, it is implemented in at least six varieties, each with its own protocol and many that modify Ethernet.

The lack of a truly standardized industrial Ethernet has come with a cost. End users must decide on one “version” of industrial Ethernet, which limits their choice and forces them into a “walled garden” of available products. Device suppliers must develop interfaces for each Ethernet version they support, which drives up development costs and creates more product varieties. The big winners of this strategy traditionally have been the large automation suppliers that likely have sold more products due to the perception of “perfect” compatibility with their favored network.

The vision of a single solution for industrial networking has always been simple: use standard Ethernet, ensure deterministic performance, and provide a single communications protocol that all devices understand. In the age of the Industrial IoT, this vision has been extended to include commonly developed information models, known as companion specifications, for devices and applications that help lower engineering costs.

The positive developments of the past two years are helping the industry to fulfill this vision through two significant initiatives: 1) the IEEE Ethernet standard is being extended to include TSN, and 2) the OPC Foundation is now actively promoting the use of its Publish-Subscribe model at the device level. This is good news for all industry players!

What’s the Network Got to Do With It?

Initiatives like Industrie 4.0 and Industrial IoT have created huge demand for data from manufacturing processes and the need for systems and devices to be connected.  The network is obviously a key element of connectivity. Unfortunately, existing industrial networks have evolved over the years to meet new requirements, but were never designed to handle the new challenges of the Industrial IoT.

The future of manufacturing will consist of well-connected, data-hungry “things” like cyber-physical systems, smart devices, and autonomous, modular systems. Simply providing enough bandwidth to handle larger data flows isn’t enough. Industrial networks of the future need to be integrated into enterprise networks with sophisticated security to prevent unauthorized entry while allowing just the right access level to company personnel and trusted external partners. Information models will allow data transfers to be mapped intelligently between devices and processes, while companion specifications will provide standard templates for software organization and application-specific semantics.

For industrial networking, the IT/OT convergence means not only modernizing the technologies used, but also expanding the role that the network plays in automation architectures.

OPC UA and TSN:  Catalysts for Change in Automation Architectures

The Achilles heels of today’s industrial Ethernet are: 1) no single, vendor-independent communications protocol; 2) no standard mechanism for deterministic behavior; and 3) the use of modified, non-standard Ethernet. The lack of specific industrial features in the Ethernet specification is what drove automation suppliers to develop their own solutions in the early 2000s. Today, as the industry undergoes its digital transformation, the call for a single, standardized solution is louder than ever. The answer has emerged in the form of two key, but originally unrelated technologies: OPC Unified Architecture (OPC UA) and time-sensitive networking (TSN).

OPC UA:  One Protocol for All 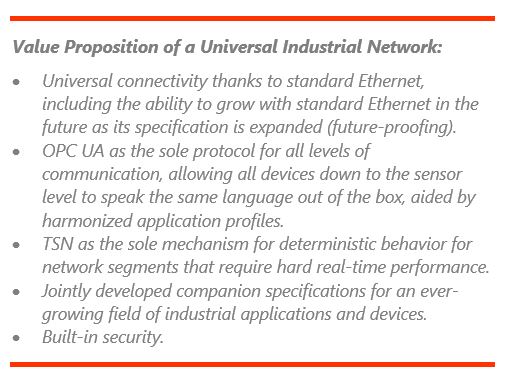 Industrial devices communicate with each other by speaking the same “protocol” – a set of read and write commands for exchanging data. Most protocols in use today were originally developed by automation suppliers as proprietary command sets. OPC UA was created to be the “glue” between dissimilar protocols to allow industrial devices like PLCs from different suppliers to talk to each other. Today, the OPC offering has evolved to become a platform- and vendor-independent communications package that is developed and maintained by the OPC Foundation, an industry consortium. Unlike the half-dozen or so industrial network organizations, the Foundation is without competition and enjoys universal support from the industrial community.

OPC communication was initially developed for the peer-to-peer level to exchange messages (blocks of data) between devices. Controllers and industrial PCs of different manufacturers used it to share non-time-critical data like recipes or blocks of configuration information. For real-time data exchange between controllers and IO modules and other field devices, traditional industrial networks were used, along with their associated protocols. This hybrid solution of OPC and specific networks is in common use today.

OPC UA Down to the Field Level

In 2018, the OPC Foundation released a major extension of OPC UA that enables communication down to the field level. Known as Publish-Subscribe (PubSub), the specification adds to OPC UA the time-critical behavior needed to control IO and other field devices. Later that year, the Foundation announced an initiative to identify OPC UA and related TSN harmonization requirements. The announcement resulted in an industry-wide show of support from automation suppliers, proving that the combination of OPC UA and TSN is the missing link that will likely pave the way to fulfilling the vision of a single industrial network. Ultimately, success will be measured by the deeds of member companies, but it is hard to recall a time when so much of the industry was pulling in the same direction at the same time.

In addition to OPC UA, the other game-changing technology is time-sensitive networking (TSN). Originally developed for the automobile industry, this timing mechanism proved to be ideal for industrial applications, so a joint working group was formed to define one TSN profile for industrial automation and develop a joint standard for IEC and IEEE.

The fact that TSN is now part of the Ethernet specification is significant because the lack of such a mechanism was the reason why the industrial world shunned the use of Ethernet decades ago. It was also the reason why suppliers later found it necessary to modify Ethernet to suit industrial requirements, which resulted in the half dozen or so versions of industrial Ethernet that exist today.

The Politics of Industrial Networking

Unlike OPC at the peer-to-peer level, which has been well-established for many years, PubSub quickly became a political football after it was announced due to its threat to the status quo. The combination of OPC UA and TSN technologies has laid the groundwork for the future of industrial networking – a future that threatens existing industrial networks and has made some suppliers nervous about the viability of their product strategies or concerned about the rapid pace of development. But in 2018, OPC members reached a compromise. According to the announcement, the OPC Foundation will now actively promote its PubSub model for communication to the field level, thus paving the way for what could become the universal solution for Ethernet in industrial applications.

The OPC Foundation initially refrained from actively promoting PubSub to the field level. In response, a group of about 15 automation suppliers, led by the companies B&R and TTTech, formed an initiative in 2016 called the Shaper Group. The Shapers lobbied actively for the rapid development of “an open, unified, standards-based IIoT communication solution between sensors, actuators, controllers and cloud addressing all requirements of industrial automation,” with OPC UA and TSN as the basis. In 2018, Rockwell Automation joined the group, bringing with it the weight of its market might in North America.

What might have developed into yet another fieldbus war was resolved in late 2018 with the announcement by the OPC Foundation that the organization will begin to actively promote OPC UA over TSN as an alternative for classic master/slave IO communications protocols. This decision removed any doubts about the future of a universal Ethernet-based industrial network. The decision is a victory for the Shaper Group, which, having achieved its goal, will likely disband. But the decision has many implications: with the future of industrial networking within reach, the onus is now on automation suppliers to implement OPC UA over TSN in field devices, promote its advantages, and provide a clear migration path for users.

A companion specification is an information model that describes and standardizes the semantics and communications interfaces for anything ranging from a device, such as a sensor or a robot, to an application, such as plastic injection molding or machine vision, to whole plant processes. Companion specifications can greatly reduce engineering and integration efforts, from system design to commissioning, by allowing users to apply a pre-engineered template to a new application.

The use of companion specifications helps in all phases of the automation lifecycle, from using a common language to describe application requirements during the bidding process, to standardizing maintenance procedures for machinery from different machine builders. While many companion specifications have already been released, many more are sure to come as OPC UA gains acceptance.

From 6 to 1:  How to Migrate to the Future of Industrial Networking

Existing industrial networks will not simply disappear overnight. The most likely migration scenario is that old and new networks will co-exist for many years. This will give end users the freedom to migrate when they feel the time is right, and suppliers the chance to coordinate product development with market demand. Most industrial network consortia are currently implementing support for TSN, and Ethernet’s support of multiple protocols means that both OPC UA and older protocols can be used on the same network in parallel. The result will be a hybrid solution that could linger for many years.

Another option is to introduce completely new Ethernet-based communication interfaces based on OPC UA and TSN and keep the existing “open-proprietary” products for quite some time in parallel on the market to support the installed base.

Beware the Installed Base

The inertia of the installed base of industrial Ethernet devices is high, so transition to new universal industrial network will be a slow process. Realistically, it will likely take many years, maybe even a generation, before the current variety of Ethernet-based industrial networks fades away. Until then, it is customary for automation suppliers to offer spare parts for 15 years after a product’s retirement.

To meet the new requirements of connectivity in a digitalized world, industry needs a new, unified solution for industrial networking to replace the current landscape of disparate, non-standard Ethernet-based networks. Recent developments indicate that the industrial world is on the right track to avoid mistakes made in the past. To meet these new challenges, ARC makes the following recommendations.