Thomas Edison successfully started “The Edison Storage Battery Company” more than 100 years ago, offering a large range of lithium batteries for cars, buses, trucks, and other uses, but this lithium battery business faded out with the success of the combustion engine and the availability of fossil fuels. Batteries for electric vehicles are now a key market driver for grid-scale batteries. Modern research and manufacturing methods have greatly improved lithium battery performance and costs. Various lithium battery configurations (NMC, Cobalt Oxide, LMO, LFP, and NCA) are disrupting the transportation and electric power industries by combining with renewable energy generation, to displace fossil and nuclear power.

The deployment of lithium for grid-scale batteries in the US prior to 2009 was exactly “zero”. There were no lithium battery projects before 2009 according to a 2016 Department of Energy report. So how did lithium batteries come to be the preferred type of chemistry by 2018? By 2001 the DOE report identified a handful of small lead-acid battery projects. In 2003 there was the 27MW GVEA (Golden Valley Electric Association), battery energy storage system based on nickel chemistry. GVEA is a cooperative which serves about 100,000 customers in central Alaska, and the battery improved grid reliability, which is a priority in cold winter conditions. Between 2004 and 2008 DOE logged many much smaller sodium-sulfur (NGK) battery projects totaling about 8.2MW. The cost performance of these sulfur-based battery projects was never demonstrated and the cost of these batteries did not decline over the 4-year period. Lithium-ion batteries in 2007 were no better as they were unproven and cost more than $1000/kWh. 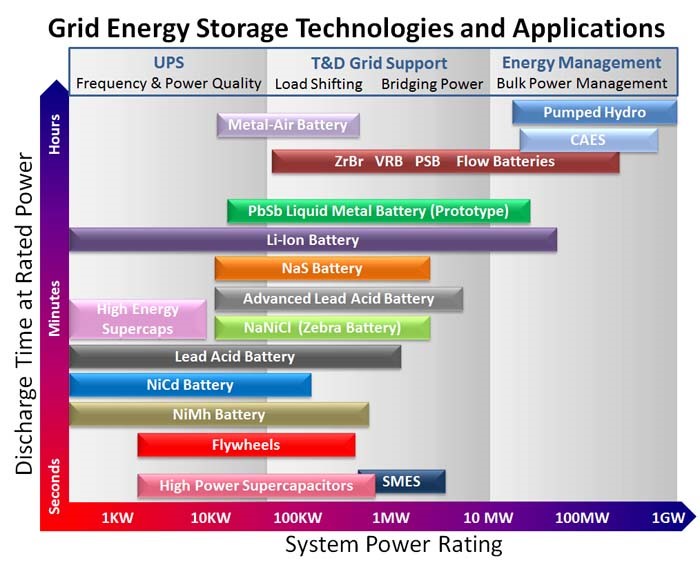 The Move to Lithium

In the period from 2010 to 2014, the US saw many new high-risk battery projects driven by the 2009 American Recovery and Reinvestment Act (ARRA) which provided public financing of about $97 million in grid-scale battery storage demonstrations. It was the independent grid operator PJM that saw an early and successful move to lithium batteries. With steady cost and performance improvements in lithium batteries, in 2015 PJM responded to the FERC (Federal Energy Regulatory Commission) 2011 order to “pay for performance” for grid services by encouraging deployment of lithium batteries for the very important frequency regulation market. PJM recognized that new lithium batteries made for the car market could charge and discharge quickly and this is exactly what was needed for frequency control. Modern electric grids use a technique called AGC or automatic grid control to balance generation and loads. In this scheme when a large load is added to a grid the frequency initially falls and synchronous motors, including those in common wall clocks all slow down slightly. This drop in frequency is the control signal used by all generators on the grid to quickly increase power to meet that load and restore grid frequency, while never noticing your wall clock was not keeping steady time.

Because the load response needs a lot of power very quickly, but only a duration long enough to bring new generation on-line, the lithium battery proved successful for this application, and in fact today, lithium batteries have filled the need and saturated the market for frequency control in the PJM service area. Other ISO and RSO (Regional System Operators) are following the lead of PJM and the new FERC 841 rule opens new market opportunities for batteries to compete in wholesale markets.  Owners and operators of renewable energy assets have found the addition of batteries can easily form micro-grids and even nano-grids when coupled with solar PV or wind generation.

The scale of new lithium battery factories being built worldwide will drive down prices for both vehicles and grid storage. At the 2018 ESA (Energy Storage Association) conference this past April, the theme was a goal of increasing grid-scale batteries in the US from less than 1 GW today to over 35GW by 2025. Battery manufacturers have lined up the critical raw materials like lithium and cobalt for ramping up manufacturing.

Chinese lithium battery manufacturers are likely to strengthen their leading market position with massive factory investments that are likely to exceed the production of the massive Tesla Gigafactory, which is on target to be the largest building footprint in the world and produce 35 GW*hr/year of lithium batteries by 2020.

On 30 April 2018 DOE announced new research projects on batteries and electrification aimed at reducing battery pack cost to under $100 per kilowatt-hour, increasing EV range to over 300 miles, and charging in under 15 minutes or less by 2028. This research is targeting lithium batteries and vehicle electrification technologies, but these lithium batteries improvements intended for vehicles will find many new applications to store electric power. These new batteries are not only being used by utilities and transmission operators but with increased distributed generation they are showing up on the distribution side of the grid. Lithium batteries are showing up in nano-grids at residences with solar PV, at large and small commercial solar fields that form microgrids, at university campuses that use micro-girds with combined heat and power, and at municipal power companies that are looking to reduce peak loads.

Grid-scale batteries have essentially become a standard, nearly plug and play component that does not suffer the siting or scheduling issues of pumped hydro or compressed air energy storage projects. High power output lithium batteries will dominate both EV and utility markets for the next decade, but there are promising advances for higher energy storage batteries that may be more competitive in markets that work to decouple generation and demand. Vanadium Redox flow batteries have seen some recent performance improvements. China is planning a 100MW Vanadium battery to reduce wind power curtailment by storing wind energy and shifting that load to better match peak demands.

In the grid energy storage chart above, Lithium-Ion batteries can span a wider range of applications than any other power source. Fast enough for frequency control and as prices continue to fall they gradually encroach on large-scale storage like pumped hydro. The economics for grid-scale batteries is likely to improve. The contest for differing lithium chemistries is a competition itself, but notice the potential for flow batteries in the chart above which so far have received only a fraction of the research dollars and have yet to benefit from economies of scale. The race is on, the stakes are high, and we are only on the first corner of a very long race track.

For more detailed information please refer to the ARC study on Microgrid Automation.