With today’s proliferation of Industrial IoT-enabled solutions across industry and infrastructure, middleware plays an increasingly important role.  As ARC Advisory Group learned in a recent briefing, suppliers, such as Skkynet, have developed solutions that address middleware’s changing role from the field to the enterprise. 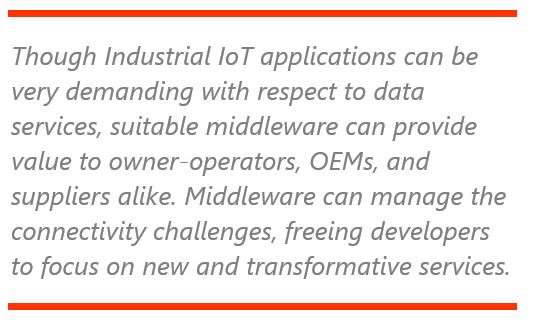 information from hundreds of wind turbines at two different sites.  A material supplier gets up-to-the-second inventory level information from dozens of remote drilling sites and schedules deliveries to keep all its customers operating smoothly. An advanced process control system for an energy-intensive mining operation is developed and maintained by experts who are thousands of miles from the mine site. Software in hundreds of dynamic production units develops and presents a unified data set to a single, but critical, MES application. The common thread in these Industrial IoT (IIoT) stories? It’s real-time IoT middleware.

Mention the term “middleware” and many eyes will simply glaze over.  Most end users view middleware as some mysterious software glue that is applied sparingly by enterprise architects and software developers, rather than a critical part of a system or solution. Middleware’s traditional role is to simplify integration of multiple siloed applications within one single enterprise.  But the Industrial IoT requires applications and services that span across enterprises, as well as reaching assets deployed in field locations, many of them quite remote. What then is the role and value of middleware for the IIoT?

Essentially, the Industrial IoT involves integrating and then improving the operation of multiple remote assets. Several aspects differentiate the IIoT from consumer applications. The most important difference concerns network security. Security is often cited as the primary barrier to IIoT deployment and growth. IIoT applications involve capital assets that are expensive or impossible to replace and these must be operated securely to protect not only the assets but also human lives and the environment. Thus, security is an absolute must. IIoT applications cannot compromise network security, provide additional cyber-attack vectors, or require specialized configurations such as VPNs or open ports in network firewalls.

Beyond security, Industrial IoT applications also demand scalability. Pilot programs do not always indicate how scalable a solution is, but installations must be easy to replicate and per-unit costs must decrease rapidly as the size of the deployment grows. Without this, the architecture is impractical.

Enter Skkynet. Skkynet originated over 20 years ago as industrial data sharing software. During that long life, Skkynet has developed into a full-service Industrial IoT middleware, addressing the many new requirements of the IIoT.  Skkynet software consists of only three major components:

These three components can be assembled quickly and in different configurations to fit various Industrial IoT application requirements. Not all components are required for any particular solution. Indeed, a number of valuable applications can be configured using DataHub alone.

One illustration of the usefulness of Skkynet software is the number of firms that have become “white label” partners.  These partners embed Skkynet software within their own Industrial IoT products and services, which of course carry their own brand.  This enables firms such as equipment OEMs to deliver advanced services that leverage their own unique in-house expertise.  By using Skkynet, they can do this without being concerned 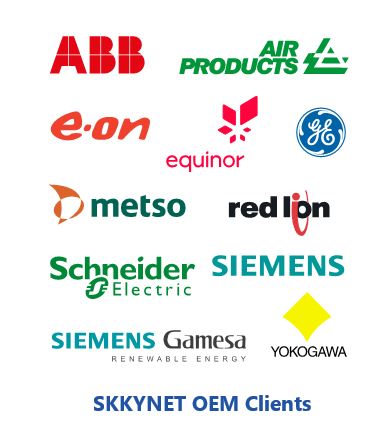 about the details of the secure remote connectivity they need. Instead, they can focus on application areas where they alone can deliver greater value to their IoT customers.  One client told ARC, “We are not aware of other off-the-shelf software that can do this.”

Returning to the wind farm example that opened this discussion, the figure below shows how Skkynet middleware can enable multiple parties to collaborate for remote assets. For internal use, Datahub services on two wind farms serve the operational needs and the IT requirements of the wind farm operator. At the same time, DataHub feeds the cloud where selected sets of data are shared with wind turbine OEMs for analytics and with other third-party suppliers.  None of these parties has direct network access to the wind farm site, and each is authorized to subscribe to a restricted data set, relevant to their particular role or service. This architecture is extremely useful in cases where multiple OEMs need access to operational information and in situations where capital assets are owned by a joint venture but operated by a single firm. In both cases, detailed operational data must be shared among several parties, but access to the capital asset itself must be restricted to the operator.