Autonomous Drones Could Be Here Sooner Than You Think

“Certifiable autonomy” is a key regulatory requirement for using pilot-less drones to transport people or even packages.  In fact, operating drones without pilots faces some of the same obstacles faced by self-driving cars, but autonomous drones could be here sooner than you think.

Although much progress has been made on the technology side of self-driving cars, in the US at least, a key sticking point has been whether the rules would limit the ability of companies to compel binding arbitration for consumers using autonomous vehicles.  Similar concerns exist for self-flying vehicles. The technical advances in drone automation and the business cases developed put significant pressure on regulators to allow drones, cars, and other vehicles to operate autonomously and share the space with human-operated vehicles.

The deployment of autonomy for drones, cars, taxis, trucks, trains, ships, and construction equipment is moving forward at a fast pace and - in some cases – will soon create sweeping changes in the transportation, high-tech, and even military sectors.

Indications are that new cars can be equipped at a reasonable price with cameras, LIDAR, radar, sensors, and software to operate autonomously. Car companies like Tesla already offer full self-driving capabilities as an option; although, as of this writing, it is not yet enabled pending government approval in the US.

Autonomous operation of drones and other vehicles will support new business models across a variety of transportation-related industries. 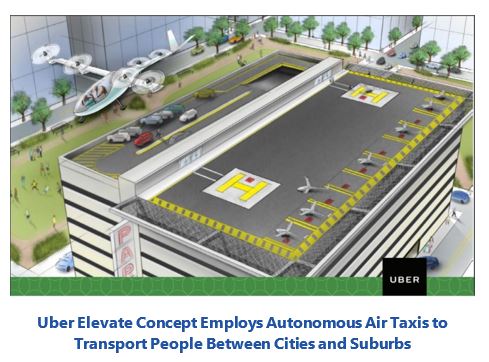 For example, the Uber Elevate team is working to develop a practical solution for what it refers to as “aerial ridesharing at scale.”  This would involve air taxis that connect suburbs and cities. However, this business model would not be feasible if the company has to use expensive, highly trained pilots to transport a typical payload of two to five people over typical distances of around 40 miles.

In his compelling presentation at the 2018 Uber Elevate Summit, Aurora Flight Sciences CEO and president, John Langford, explained why and how “automation is eating aviation.” He stressed that – due to the economics – certifiable autonomy will be a key enabling factor for pilot-less aircraft at scale (and suggested that this was also why Boeing Corporation recently acquired his company).  According to Mr. Langford, “Drone automation takes a complex task and simplifies it.”  He explained that this is yet another example of technology masking complexity.  With automation, operating a drone is “so simple, anyone can do it.”

Aurora recently demonstrated a full size, nine-rotor prototype of an Uber air taxi.  Aurora, one of five companies making drones for Uber, has considerable experience with automated flight controls and is working closely with NASA on the UTM (Unmanned Traffic Management) system that will be needed to certify drone autonomy.

Morgan Stanley recently placed the market for self-flying drones at $1.5 trillion. More than 20 companies are now developing self-flying vehicles, which are a far cry from the “flying cars” imagined in science fiction decades ago. Most designs will have multiple rotors with electric power to support vertical takeoff and landing (VTOL) and many will operate with fixed wings.