Overall, automation suppliers saw their revenues drop by 1.7 percent during the first quarter of 2017.  Depressed oil and

Process automation suppliers continue to suffer most from exposure to low oil prices, though many have been able to stem revenue declines by shifting from major capital projects to MRO activities.

Many discrete automation suppliers fared better, thanks to stronger investment activity in the electronics and automotive industries, particularly in Asia.

Compared to the first quarter of 2016, the total combined revenues of automation suppliers to both the process and discrete manufacturing industries dropped by 1.7 percent (see Figure 2).  Process industry suppliers saw their combined revenues grow by half a percentage point, reflecting the slowdown in activity in the oil & gas sector. (If a recent large acquisition by Thermo Fisher is excluded, revenues would have fallen by 1.3 percent).  Suppliers to the discrete industries saw a 3.7 percent decrease in combined revenues. (However, discrete suppliers would have seen actual growth of about 7 percent, if General Electric had not recently divested its appliance and lighting businesses).

In this Insight, ARC Advisory Group includes the most recent quarterly results for major automation suppliers that publicly report their results.  To convert the revenues of non-US suppliers to US dollars, we average exchange rates for foreign currencies used for the entire first quarter of 2017.  The euro declined by 3.4 percent relative to the dollar from Q1 2016 to Q1 2017, while the yen appreciated by 1.4 percent over the same period.

ABB Industrial Automation’s (formerly Process Automation) revenues dropped by 7 percent from the same period in 2016 and orders fell by 8 percent due to a drop in large orders for specialty vessels.  However, base order activity picked up, reflecting an improvement in demand for products, services, and software. ABB attributed the revenue slip to lower revenues from the execution of order backlogs.

AspenTech saw flat revenue growth during the quarter, rising a tenth of a percent to $119.3 million.  Subscription and software revenue was $111.7 million, matching the revenue from the previous year.  Services and other revenue was $7.6 million during the quarter, up very slightly from the prior period.  Aspen reported that increased demand on the operations side helped offset a falloff in engineering and construction activity in the upstream sector.

Emerson Automation Solution’s revenues declined by 3.5 percent during the quarter as spending remained tight in energy-related process industries.  However, the company reported improvement in the power and life sciences markets.  Underlying sales in North America declined by 2 percent, while the European business was flat.  Sales declined by 2 percent in Asia, by 9 percent in the Middle East & Africa, and by 16 percent in Latin America. Emerson expects that increased MRO activity, particularly in North America, will help buoy the rest of the company’s fiscal year.

Global instrument supplier Endress+Hauser did not report revenues for Q1, but did release its annual report for 2016 this month.  Revenues for the year slipped by 0.2 percent to $2.28 billion, largely due to the negative effects of currency translation.  Based on local currencies, business was actually up by 1.2 percent.  Endress reported good performance on its home turf in Europe, while sales in the Americas declined.  Revenue growth in Asia was flat, while the Middle East and Africa made positive contributions.

FANUC’s revenues for its Factory Automation and Robot Groups grew by 24 percent, finishing big in the final quarter of the fiscal year, which started with double-digit declines.  For the entire fiscal year, FANUC’s Factory Automation Group reported a 2.8 percent increase in revenues as sales to major Asian countries improved, and demand increased in the machine tool industry in China.  The Robot Group saw sales rise by slightly under 1 percent versus the same period in 2016, as stronger activity in China and Japan was offset by slowing but steady investment in the automobile industry in the Americas and Europe.  Order activity for FANUC as a whole increased by 21 percent during the quarter, but fell by about 4 percent for the entire year.

Flowserve’s revenues declined by nearly 9 percent compared to the same quarter in 2016. Order bookings increased by 4 percent to $958 million. Orders for the Engineered Product Division grew by 9 percent, while revenues dropped by about 11 percent. Flowserve’s Industrial Product Division saw bookings fall by 0.5 percent and revenues by about 10 percent.  The Flow Control Division reported flat bookings, while revenues dropped by about 6 percent versus the same period in 2016.

Fortive Corporation (formerly appearing as Danaher in our coverage) saw revenues increase by about 4 percent during the quarter to $1.53 billion. The Industrial Technologies segment’s revenues grew by 5.4 percent, mostly organic, with acquisitions contributing over 1 percent and currency exchange sapping slightly less than 1 percent. The Professional Instrumentation unit saw revenues grow by 2.7 percent; core growth of 4.6 percent was weighed down by acquisition/divesture activity and exchange rates.

Honeywell Performance Materials and Technologies reported a 9.3 percent decrease in revenues to $2.06 billion during the quarter.  Currency translation had a significant effect on revenues. Honeywell reported organic revenue growth of 5 percent for PMT, due to strong sales of advanced materials and the gas processing business in UOP.  Segment margin expanded 260 basis points to 22.8 percent, reaching $471 million.

Metso Flow Control saw revenues grow by over 7 percent from the same period in 2016.  Order activity during the quarter was up by 2 percent due to an increase in demand for pumps, valves, and valve services.  Orders in the oil & gas sector were flat versus the previous quarter, while pulp & paper project activity increased.

Mitsubishi Electric’s industrial automation business sales increased by about 8 percent versus the same quarter in 2016.  The factory automation systems business saw an increase in orders compared to the same period the previous year due to CapEx growth in the smartphone and automotive industries in China, along with the organic LED industry in Korea.  The automotive equipment business posted decreases in orders and revenues as car sales slowed in Japan; a stronger yen dragged down overseas revenues.  For the entire fiscal year, revenues were down by 1 percent. 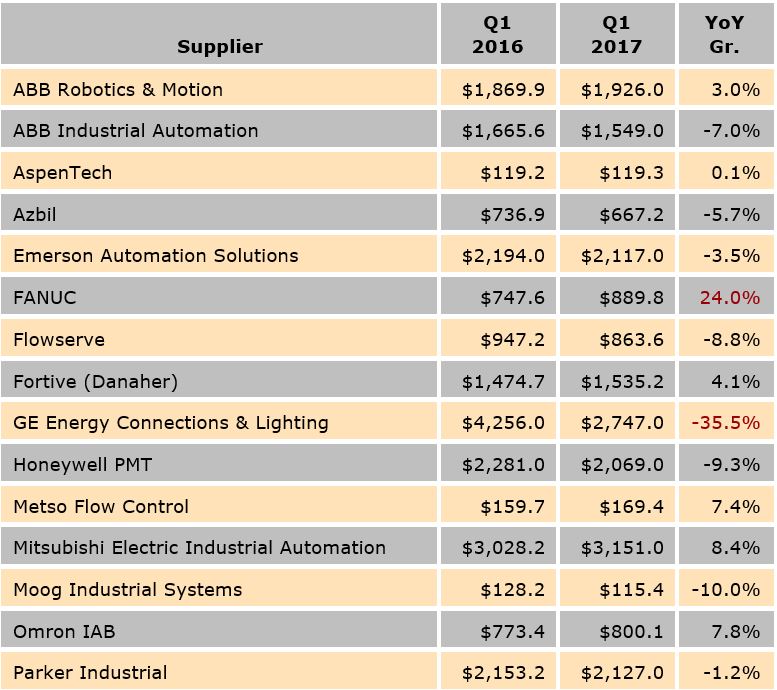 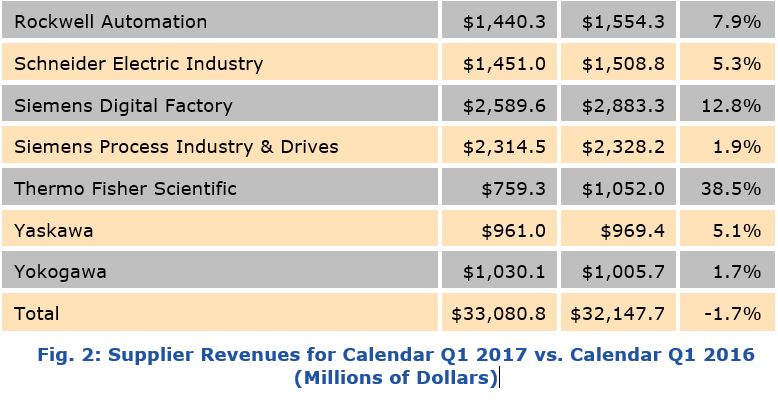 Moog’s industrial sales slipped by 10 percent compared to the same period in 2016.  Revenues for the industrial automation unit fell by 8 percent. Sales in the test and simulation business dropped by 9 percent, while activity in the energy sector fell by 15 percent.

OMRON’s Industrial Automation business revenue grew by nearly 8 percent compared to the same period in 2016.  For the entire fiscal year, sales in Japan grew by over 2 percent, while overseas sales dropped by 4 percent as the oil & gas sector in North America continued to see weak demand (offset somewhat by improved demand in automotive-related industries).  China and Korea also buoyed sales due to renewed investment in the digital, infrastructure, and environmental industries.  Sales in Europe also increased slightly.  The stronger yen also contributed to the revenue decline from overseas business.

Rockwell Automation’s revenue grew by 8 percent during the quarter compared to the same period in 2016.  Sales of control products and solutions increased by 3 percent to $835.3 million.  Architecture and software sales saw growth of about 14.2 percent to $719 million. 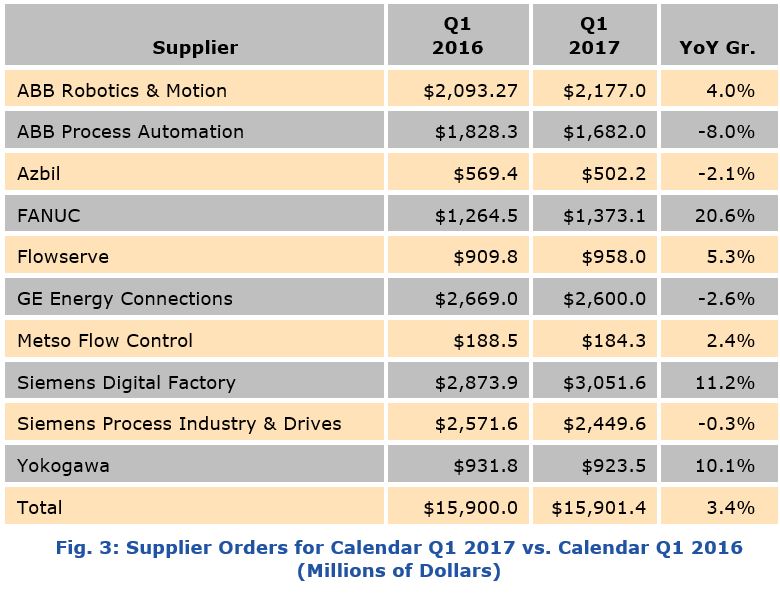 Schneider Electric’s Industry division reported that revenue grew by 5.3 percent organically during the quarter due to stronger demand in the discrete industries and Process Automation activity showed signs of improvement.  China saw strong growth in the discrete industries.  Western Europe saw growth in Spain, Italy, and Germany, while activity in France was flat.  North American business was up very slightly, driven by OEM activity in the U.S.

Siemens Digital Factory saw revenues grow by nearly 13 percent during the quarter compared to the same period last year; order activity increased by 11 percent.  Siemens reported growth in revenues and order activity in all businesses, driven by strong demand in the automotive and machine building industries.  Process Industry and Drives saw revenues grow by only 2 percent due to depressed oil and commodity prices, while stronger sales in wind power equipment provided a tailwind.  The Process Automation business saw double-digit order growth, offset by declines in the commodity-related markets.  Overall order activity was flat.

Thermo Fisher Scientific’s Analytical Instruments segment revenue increased by 38.5 percent versus Q1 2016, largely due to the company’s acquisition of FEI in September 2016.  Organic growth was around 5 percent.  Operating margin grew by over 3 percent.

Yaskawa revenues for the quarter grew by 5 percent versus the previous year.  For the entire fiscal year, Yaskawa’s Motion Control business slipped by slightly over 2 percent, though sales of AC servos, particularly to the smartphone sector in China, were robust.  Lower demand in the oil & gas sector continued to hamper the drives business.  The Robotics business saw revenues fall by 9 percent, largely due to unfavorable currency translation, while Yaskawa’s Systems Engineering sales were up by nearly 12 percent, thanks to increased sales to the steel and wind power sectors.

The new year brought cautious optimism to the automation market, with revenues slightly less in the red, and order activity picking up, particularly for discrete-centric suppliers, who saw strong upticks in revenues and orders.  The price of oil remains low, stifling project activity in the oil & gas sector, but a shift to MRO activity and smaller scale projects appears to have helped to stem revenue declines for many suppliers.