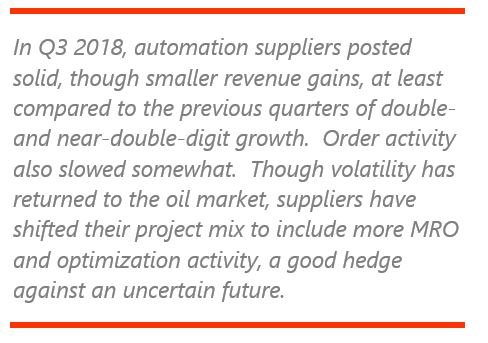 Automation suppliers continue to see robust revenue growth, posting overall year-to-year gains of nearly 6 percent versus the third quarter of 2017.  While the market is well along on its recovery from the oil price collapse of a few years ago, Q3 growth was relatively modest, especially on the heels of several quarters of double- or near-double-digit growth.  The discrete automation sector slowed somewhat on reduced activity in the smartphone and electronics sectors.  On the process side, the effect of recent acquisitions was less pronounced than in past quarters and many suppliers saw more muted organic revenue growth.  Order activity displayed similar behavior to revenues, with slower growth in Q3.

Compared to the third quarter of 2017, the total combined revenues of automation suppliers to both the process and discrete manufacturing industries grew by 5.7 percent (see Figure 2).  Process industry suppliers saw their combined revenues grow by 6 percent; while suppliers to the discrete industries saw a 5.6 percent increase in combined revenues.  GE Power, due to its large size but relatively small automation component, has an outsized effect on the overall market (revenues fell by 33 percent), so we have removed it from the overall analysis, though we will continue to cover it in the writeup that follows.

Among suppliers that report order intake, many saw large increases in activity during the quarter.  On average, orders grew by 6.5 percent during the quarter (Figure 3).  As with revenues, we have excluded GE from our analysis, which saw an 18 percent drop in orders.

In this Insight, ARC Advisory Group includes the most recent quarterly results for major automation suppliers that publicly report their results.  To convert the revenues of non-US suppliers to US dollars, we average exchange rates for foreign currencies used for the entire third quarter of 2018.  The euro slipped by slightly over 1 percent relative to the dollar from Q3 2017, while the yen dropped by about half a percent over the same period.

ABB Robotics & Motion reported an 8 percent increase in revenue, and 12 percent growth in orders during the quarter; ABB reported strong growth in China and increased demand in the rail, automotive, process, and food industries.  ABB Industrial Automation saw orders rise by 3 percent thanks to the ongoing recovery in the process industries, while revenues slipped by 1 percent.  Order activity for specialty marine vessels was strong.  Currency translation reduced ABB’s revenues in dollar terms by a few percentage points during the quarter.

Aspen’s revenues dropped by nearly 9.7 percent during the quarter, largely due to the company’s adoption of accounting standard (ASC Topic 606), which impacts the timing and method of revenue recognition for term license contracts.  License revenues, which fell by 19 percent, were affected most.  Maintenance revenue increased by nearly 7 percent, while revenues from other services were essentially flat.  Annual spend, the company’s measure of the annualized value of all term license and maintenance contracts, which it believes to be a more accurate measurement of its business performance, reached $498 million during the quarter, an increase of about 8 percent. 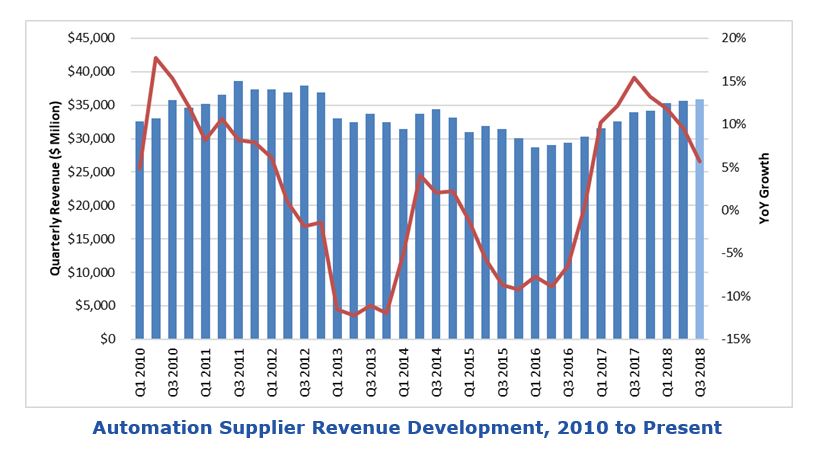 Emerson Automation Solutions reported sales growth of over 11 percent during the quarter; underlying sales increased by 9 percent, with unfavorable currency exchange rates sapping 2 percent and acquisitions adding 4 percent.  Emerson attributed growth to increased MRO activity and an increase in projects to expand and optimize existing production facilities.  Sales in North America grew by 11 percent on strong activity in the oil & gas sector, while Asia also posted 11 percent growth in revenues, driven by investment in China and India.  Latin America also saw significant growth, while growth in Europe and the Middle East was more modest at 2 and 7 percent respectively.  In October, Emerson announced its plans to acquire the Intelligent Platforms business from GE to enhance its discrete automation offerings.

FANUC saw flat revenue growth during the quarter; order activity dropped off by nearly 11 percent.  FANUC’s Factory Automation Division grew by about 4 percent, while the Robot Division saw sales slip by 4 percent during the quarter.  FANUC saw strong demand from the machine tool industry, particularly in Japan, China, and Europe. A slowdown in investment in the automotive sector in the Americas offset stronger robot business in Europe and China. 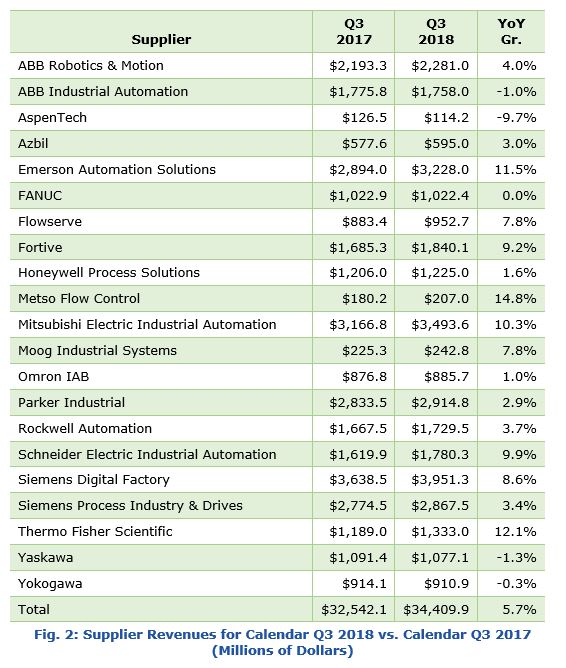 Honeywell Process Solutions sales increased by only about 2 percent during the quarter, as 4 percent organic growth was muted by currency exchange.  The company reported strong increases in projects and maintenance and migration services, but a drop in activity in the smart energy business. 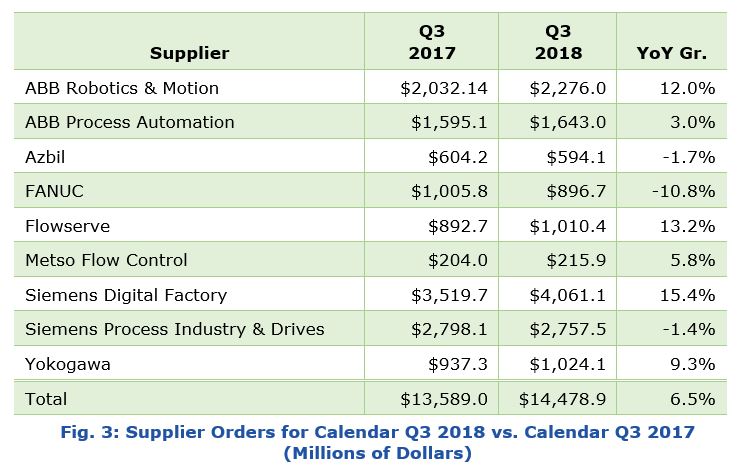 Mitsubishi Electric’s Industrial Automation group reported a 10 percent increase in sales during the quarter.  The company’s factory automation business declined somewhat due to a temporary slowdown in capital expenditures in the OLED and smartphone industries. Mitsubishi’s automotive equipment business saw increased demand in Japan, other parts of Asia, and Europe, along with increased activity in sales of electric-vehicle related equipment.

Moog’s industrial sales grew by nearly 8 percent during the quarter, largely fueled by currency rates and acquisitions (organic growth was more on the order of 5 percent).  Automation revenues increased by 15 percent, buoyed by the recent acquisition of VUES Brno in the Czech Republic, while energy sales grew by 13 percent on stronger demand for power generation products.  Simulation and test revenues increased by 4 percent.  For the entire fiscal year, Moog’s sales increased by 11 percent, about half of which was organic.

Omron’s Industrial Automation Business (IAB) saw revenues rise a scant 1 percent during the quarter versus the previous year.  For the first two quarters of the fiscal year, Omron’s revenues were up by over 4 percent.  Omron reported strong activity in the automotive and machinery sectors, offset by a slowdown in the semiconductor and smartphone sectors.  Over the six-month period, business in Japan’s domestic market rose by over 5 percent, while overseas sales grew by about 2.5 percent.

Schneider Electric Industrial Automation reported growth of almost 10 percent during the quarter, boosted by the AVEVA acquisition (organic growth was more on the order of 6.6 percent).  The company reported growth in all regions, and across discrete, process, and hybrid industry sectors. The process automation business saw increased demand from investments in brownfield projects and end user efficiency initiatives.

Digital Factory saw revenues increase by 9 percent; orders rose by about 15 percent.  Siemens’ software business increased significantly due to strong demand and the acquisition of Mentor Graphics.  Globally, all regions posted strong growth, particularly the US and China.

Process Industries and Drives saw a 3 percent increase in revenues, while order activity slipped by 1 percent.  Unfavorable currency exchange rates had major impact, as revenues would have been up by 6 percent, and orders up by 1 percent on a comparable basis.  Siemens reported strong growth in its large drives and process automation businesses; revenue growth was largely driven by activity in China.

Thermo’s Analytical Instruments business saw revenue grow by 12.1 percent versus the same period the previous year.  Operating margin increased to 22 percent, up very slightly from Q3 2017.  Acquisitions played a much smaller role in revenue growth than in past quarters, contributing only about 1 percent during the quarter.  Unfavorable currency exchange rates brought down revenues by 1 percent.

After a strong start to its fiscal year last quarter, Yaskawa revenues slipped by about 1 percent during Q3. Yaskawa’s Motion Control business dropped by 4 percent as sales to the semiconductor and electronics sectors slowed, while the drives business in China and the US oil & gas sector remained steady.  The Robotics segment saw revenues slip by about 1 percent; stronger automotive sector sales were muted somewhat by a slowdown in smartphone business.  Yaskawa’s Systems Engineering business revenues dropped by nearly 12 percent during the quarter.

The recovery in the automation market is ongoing, though not as strong as over the past several quarters.  While still well into positive territory, order taking also slowed somewhat in Q3, particularly among process suppliers.  Suppliers appear to have a good mix of new and MRO business lined up, which bodes well for the quarters ahead and may be a buffer against the volatility that has returned to the oil market.  As evidenced by Emerson’s play for GE Intelligent Platforms, acquisitions will continue to play a role in market dynamics.